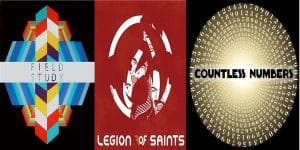 Legion of Saints is a four-piece independent alternative-rock band based out of Ottawa. Their songs feature intricate guitar hooks and catchy choruses, with a sound that embraces a mix of high and low distortion guitars, low to mid-range punchy bass and powerful drums.

Countless Numbers have two EPs, Won (2017) and Seconds (2019), which were recorded and mixed at Lincoln County Social Club by the John Dinsmore.