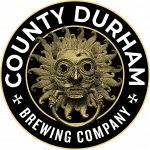 Founded in 1996, County Durham Brewing was largely Bruce Halstead’s one-man operation for a quarter century until partnering with Toronto’s original craft beer bar, C’est What, in 2021. His attention to detail can be appreciated in the publicly and critically acclaimed brews sold under the Durham and C’est What labels. Specializing in cask ales the brewery offers a variety of styles to bring you beer-balance and zen.

You can purchase beer for takeaway at C’est What at 67 Front St. E., Toronto though this link.
Delivery and takeaway from the brewery store at 1885 Clements Rd., Pickering is available here.

Is the power of two something greater than the sum?
“Two hands clap and there is a sound, what is the sound of one hand?”

Fueled by a passion for English style ales, Bruce Halstead established County Durham Brewing Company in Pickering in 1995. The brewery’s name was inspired by his family’s history in County Durham, England, and the famous door knocker of Durham Cathedral is proudly displayed as part of the brewery’s logo.

Production at the brewery began in March 1996, with Bruce crafting his beers using traditional ingredients and remaining true to the style of English ales. Building on the success of many years of home brewing, and his experience as a BJCP accredited beer judge, Bruce honed his skills and became a talented brewer producing consistent, quality beers.

Starting a brewery in the nineties was not without its challenges, however. Quality equipment and adequate funding was hard to come by, and the almost total demise of craft brewing in the US in the early nineties made things difficult to say the least. Thanks to Bruce’s meticulous attention to detail, his dedication to traditional beer styles, and his stubbornness, County Durham Brewing weathered the storm and became one of the major cask beer producers in Ontario.

Today, Bruce still maintains a focus on English style ales, sourcing authentic ingredients from traditional malted barley to heritage hops. In addition to these styles, however, Bruce also produces an increasingly varied lineup of specialty beers in partnership with C’est What, taking advantage of the ever-widening range of international hops and beer recipe inspirations.

One of the latest developments in the now C’est What Durham Brewing repertoire is the exciting concept of ‘cask in a can’. This is the endeavor of delivering delicious ‘cask-style’ ale in tall boy format.

A Brief History C’est What Brewing

C’est What’s history as a brewery dates back to founder George’s formative experiences as a home brewer. Initially attracted to the idea of a seemly inexhaustible supply of inexpensive beer, he soon found that the best reason to DIY in the 1980s was flavour. In those days you could try any two brews selected from the “wall of beer” at the “Brewers’ Retail” and be hard pressed to tell any difference beyond the design of the label. 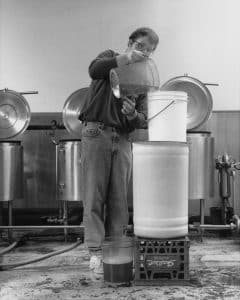 In the early 1990s the rise of brew your own shops gave C’est What the opportunity to add some overlooked and unexplored beer styles to our draught menu without sacrificing any precious customer space for equipment. We first brewed at Select Brewing on Mowat Avenue. Although it was set up as a malt extract brewery, the proprietors helped us add full grain flavour by fashioning a makeshift mash tun out of spare parts. After production, the wort would be transported in 50L plastic carboys back to the restaurant in back of an old Nissan Sentra. Once back at the pub, the yeast would be pitched and the remainder of the usual brewing would be carried out with bits of equipment expertly jury-rigged by C’est What managing partner Tim Broughton. It is during was during this time that Toronto’s original Coffee Porter was born. Doug Pengelly (pictured) of Junction Craft Brewery got his first taste of brewing over kettles of C’est What brews. 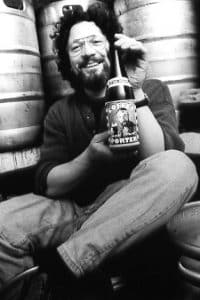 After a couple of years we moved production out to Simon Cowe’s Lakeside Brewing, near The Beach. This is where Simon developed the first Hemp Ale recipe for us. It is also where we crossed paths with Alan Moore (pictured) of Al’s Cask Ale fame. Al would be our brewmaster through a foray in contract brewing at Trafalgar Brewing where we bottled the Coffee Porter in 625 mL bottles for sale at the LCBO. 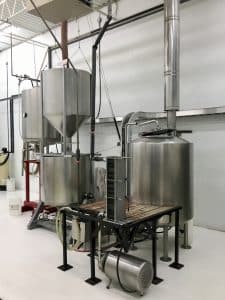 Over the past couple of decades we have produced most of our house brews at Durham Brewing. Bruce’s attention to detail, love and understanding of balanced brews, and obsessively cleaned brewery have been a good fit for us. So good a fit, that we have recently turned our common-law marriage of convenience into a bigger commitment. Together we are celebrating our honeymoon by releasing eight different brews this year in tall-boy cans.

True to our reputation at the go-to pub and brewery for cask ales, six of these offerings are cask-in-a-can, nitro packaged.

The cans are available for sale at the C’est What bottle shop or the new Durham Brewing Company craft beer store. Those living downtown will be able to get same day delivery through our delivery partners. Durham region weekly deliveries can be arranged through the brewery’s online store.